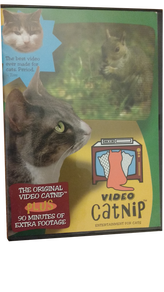 There are FOUR parts to the 2 hour Video Catnip DVD.

Be sure the sound on your tv is up.

The first short segment of VIDEO CATNIP is a fast paced collection of critter antics set to a humorous "Keystone Cops" type of musical accompaniment which produces two separate effects, one of which is to entertain the human viewer and the other is to signal the kitty that his favorite show is starting.

The second is again a musical piece, but this time much slower. Its purpose is to give notice to the human viewer and the cat that the kitty portion of the show is about to begin by giving the critters more time on the camera for the kitty and cutting down on the hillarity for the humans (the second effect becomes more meaningful to the kitty after four or five viewings.)

The third segment, (over 21 minutes of the 25 minute original production running time) is for cats only. The cats are exposed to some beautiful close-ups of most of the outdoor animal cast with many group shots included. Although this segment is designed to be for cats only, many people find it not only entertaining, but very relaxing.

The fourth and last segment, (1 1/2 more hours), is the additional footage found only on the DVD version, which is just for cats with more critter close ups and more natural birdy sounds.

As far as the effectiveness of Video Catnip to entertain cats, we've tested it on many cats and have come to the following conclusion: it is most effective on indoor cats; almost 100 percent of the cats we tested watched Video Catnip to its conclusion within the first few times they saw it.

The cats least impressed were the cats that spend most of their lives outdoors. The second thing we noticed is that kittens under four months of age appear to be oblivious to Video Catnip. But quickly after that, as they mature, they enjoy it tremendously. So it's also a great gift idea for someone you know that has a new born kitty.

Cats react differently. Some will watch VIDEO CATNIP a few minutes just sitting there and then begin to roll around on their backs watching the show upside down. Some will paw at the screen, extending a tentative paw lightly on the images. Some cats will run around behind the TV trying to figure out where all the birdies are going or even around the house looking for them.  Many of the kitties make those little mewing noises that cats make when they see birds

The third observation we've made is that the cats will glance at, and sometimes sit in front of, the television set even when Video Catnip isn't playing. We assume that they're hoping the birdies will sudenly appear. Some customers have reported having their cats come from all parts of the house, even from various stages of sleep, at the sound of the DVD player mechanism activating.

And we've even received reports that some kitties will push the tv's remote control towards their owners, as a signal that they want to watch VIDEO CATNIP on DVD again...really  :)

Your VIDEO CATNIP 2 hour DVD comes pre-programmed to loop continuously. Just pop it in your DVD player and it will keep running until you stop it. This is a great way to keep your cat entertained while you are away.

And if you are traveling with your cat, be sure to pack VIDEO CATNIP on DVD in your suitcase.  When you play it for your kitty in a place they are not use to being in and may be a little stressed out, upon seeing the familiar critters on the tv and hearing the sounds, it can help your cat relax and become more quickly acclimated to their new surrounding.

We hope that you'll decide to treat your cats (or those of a friend or relative) to VIDEO CATNIP on DVD.  It's been proven by over a millions cat watchers that it's the most unique and enjoyable kitty entertainment program on the market.  We guarantee your kitties complete satisfaction.
Buy Video Catnip For your kitty